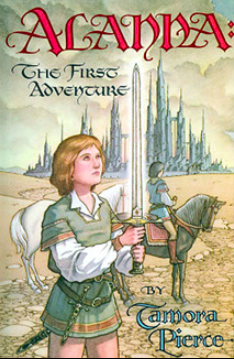 The Alanna of Trebond series by Tamora Pierce were without a doubt my favorite books pre middle school. I’m not sure if I actually read in middle school -it might not have been cool. (I totally read in middle school -I just don’t remember because my mind was eclipsed by the fog of puberty). There were a lot of books I loved in elementary school but these stand out to me because the Alanna series is a fantasy series. And although my love of reading has continued unabated into adulthood, I’m not much of a fantasy reader any longer. If I do read fantasy it’s never high fantasy and it’s always kid-lit.

However, in the last two books I’ve written, reading (and specifically reading fantasy) plays an important role in the lives of the characters. In WIRED MAN AND OTHER FREAKS OF NATURE the main character reads aloud from the Lord of the Rings series with the girl he doesn’t know he has a crush on. His relationship with his best male friend parallels the relationship between Sam and Frodo. Instead of a ring of power, Ben and Tyler are carrying the secrets of their past. In Tolkien’s world there was a place for platonic love so strong that the character’s would sacrifice themselves to save each other and/or accomplish the quest. I wrote WIRED MAN as an attempt to understand love and friendship between high school boys but it’s funny to me, that the model I chose was from a fantasy novel. How does fantasy free us to experiment with relationships in ways that might be too risky in real life?

In the book I’m currently working on the main character reads and rereads the Harry Potter series as a way to make him feel safe. When a (well intentioned) teacher suggests that he takes more risks as a reader he stares through her as if to say, “Look lady, everything in my life is a risk right now, so don’t deprive me of the one landscape in which I feel secure -even if it’s full of death-eaters and dementors.”

I don’t want to trivialize other people’s connection to reading fantasy as pure escapism, although I think the best reading has at least a little bit of that no matter the genre. Who doesn’t want to get lost in a story, regardless of the genre? My daughter loves fantasy but I’m starting to realize that it’s adventure that she really loves and that’s what’s allowed her to transition to reading Bridge to Terabithia and The Mixed up Files of Mrs. Basil E. Frankweiler.

Could it all really be as simple as the hero’s journey? That what moves us as readers, is not the setting, but the epic importance of a quest ventured and a quest fulfilled? Is that why I love road trip novels and survival stories despite the fact that they take place in the “real world”? 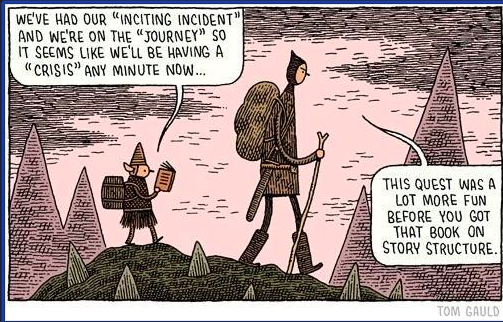 Possibly. Or possibly, the importance of fantasy is that it gives us permission to imagine things we are afraid of but disguise them as orcs, or dementors. We can follow along with a character disguising their gender to learn sword craft even as the drama of middle school forces us to grapple with or disguise our own identities. And of course there’s the importance of the quest; the desire to be a part of something greater than oneself. So read some fantasy, it’s a cheaper than therapy way you can find out what’s really going on in your life!